On 15 and 16 December 2021, our colleagues, Kai Leichsenring, Magdi Birtha, and Veronica Sandu provided a training on Ageing and long-term care, as part of the Bridge Building Peer Reviews and Trainings project. The training was attended by almost 20 participants, including government officials from the Ministry of Social Policy of Ukraine, as well as by actors from regional authorities, researchers and civil society representatives, who are working on improving long-term care policies and developing social services for older people with care and support needs.

Article: The future of work – new forms of employment in the Eastern Partnership countries: platform work by Gineikyte and Graaf

The study investigates changing patterns of work triggered by digitalisation in Armenia, Azerbaijan, Belarus, Georgia, Moldova and Ukraine. It aims in particular to fill the knowledge gaps on emerging platform work in the region, both web-based and on-location. The report aims to trigger a wider reflection on policy implications arising from the new trends in online labour and skills demand and changes in work organisation. Read more

During 2020 there was a steady increase in people’s incomes. The nominal incomes of the population increased by 6.1% compared to the preceding year and in the first quarter of 2021 there was an additional rise by 16.1%.

During 2020 there was a steady increase in people’s incomes. The nominal incomes of the population increased by 6.1% compared to the preceding year and in the first quarter of 2021 there was an additional rise by 16.1%.

This increase in income was in particular due to increasing social standards and statutory guarantees. For instance, the defined subsistence minimum increased by 8.0% in 2020 and by another 9.3% in 2021. It is now at about 2,300 UAH which is about €75. In line with the growth of the subsistence minimum, all statutory social entitlements determined by it were increased.

In order to create preconditions for the further development of the subsistence minimum and to change the approaches of its calculation, a draft law was developed and submitted to the Parliament (Verkhovna Rada) of Ukraine. The draft law stipulates in particular that only the minimum pension and social benefits as the main source of income for a person should depend on the threshold of the subsistence minimum.

In order to address the most important challenges of social development, such as the unfavorable medical and demographic situation, the low level of welfare and the low efficiency of the health and social protection system, the Human Development Strategy was adopted.

This Strategy is a comprehensive document that sets out long-term and strategic goals as well as main tasks to be implemented in the areas of demographic development, health, education and science, culture and sports as well as in the improvement of living standards, the establishment of family values and in ensuring equal rights for women and men.

In order to reduce and prevent poverty, the Poverty Reduction Strategy was implemented, which had a positive impact on the poverty situation. Between 2016 and 2019 the poverty rate (share of incomes below the actual subsistence minimum) decreased in absolute terms from 51.1% to 23.1 %.

However, due to the deteriorating socio-economic situation caused by the spread of the COVID-19 pandemic and related measures (lock-down, quarantine etc.) the poverty rate has slightly increased again in 2020 to 23.2 %.

Mitigating the negative impact of the pandemic

In order to mitigate the negative consequences of the pandemic, the Ministry of Social Policy has introduced a number of measures and the Government has adopted several regulations aimed at supporting business, the working population and vulnerable groups, including:

Moreover, the endeavours to strengthen social protection for the most vulnerable are ongoing. In particular, in 2021 incentive mechanisms for unemployed workers from low-income families to return to the labour market was introduced. They are provided with assistance in starting their own business, including purchasing equipment and materials (the programme will start in January 2022). To support low-income families with many children, the Government has decided to provide one-time cash benefits in the amount of 2,000 UAH (about €65) per child to prepare for the school year. This payment should be provided to 145,000 children raised in large low-income families.

A new Strategy for Digital Transformation of the Social Sphere was adopted by the Government of Ukraine in October 2021. The main objective is to create a unified information environment in the area of social welfare and social work, in particular a unified register of providers, clients of social services and beneficiaries of cash benefits, as well as to introduce a system of monitoring and evaluation.

Electronic services are being introduced using the “Unified Information System of the Social Sphere” to bring social services closer to citizens, which will ensure, in particular, the provision of all services at one approximate point.

The National Action Plan for the Implementation of the Convention on the Rights of Persons with Disabilities until 2025 has been approved.

With these decisions and interventions the Government of Ukraine is taking appropriate steps and providing measures in the area of social welfare to implement Ukraine’s European integration commitments and to improve the welfare of citizens.

The 47th General Assembly Meeting (GAM) of the European Centre closed with a great success with over 50 participants.  It was the first GAM 2021 which was open to the public and took place fully virtual for the second time on 19 & 20 October 2021. 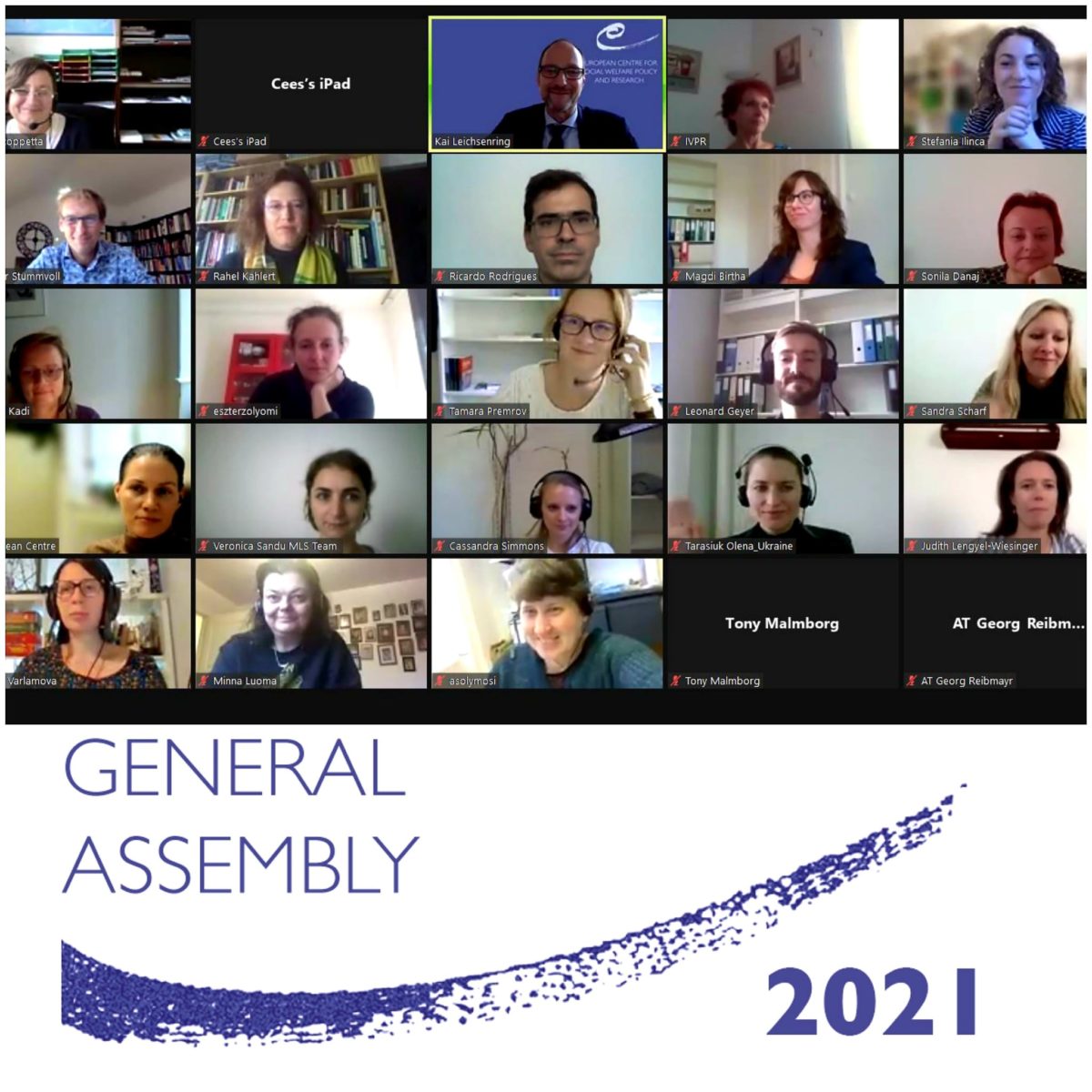 The 47th General Assembly Meeting (GAM) of the European Centre closed with a great success with over 50 participants online from various countries, namely Austria, Azerbaijan, Finland, Norway, Poland, Slovakia, Spain, Sweden, Switzerland, Ukraine etc. It was the first GAM 2021 which was open to the public and took place fully virtual for the second time on 19 & 20 October 2021. The GAM 2021 focused on intergovernmental cooperation in social policy and research and around 60 participants including our Board Members, NLOs, observers, as well as European Centre staff discussed international strategies regarding the UN Agenda 2030 or the WHO Decade on Healthy Ageing. The presentations are accessible with this link.

We look forward to continue our successful collaboration and see you in person next year for the GAM 2022 at  the UN Vienna premises. 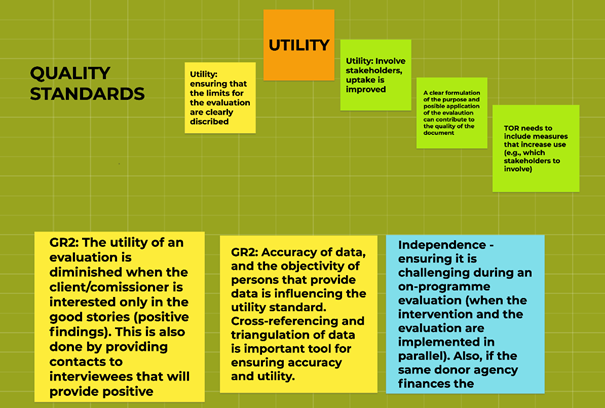 Meta-evaluation is an “evaluation of evaluations” to improve future evaluation work. As a highly relevant topic for professionals working in social policy, the third module of the virtual Bridge-Building Summer School of Evaluation in Social Policies (25-27 August 2021) was about meta-evaluation and evaluation standards in social policy. This module was one of eight modules covered by the Summer School, which combined capacity building by enhancing knowledge and information sharing on the state-of the-art research and policy practices, exchanging shared experiences among participants, and developing ideas and proposals for “real-world” projects. “Real world” refers to the idea that evaluations take place under budget, time, data, and political constraints (see Bamberger & Mabry, 2019). One central focus was the interactive, hands-on small-group work with practical exercises to foster peer learning. Eye level interactions were core building blocks. The thirteen participants shared their expertise in either conducting or commissioning evaluations. The participants were social policy professionals from both the public and private sector in the Western Balkan region and Eastern Partnership region (in particular, Azerbaijan, Albania, Bosnia and Herzegovina, Kosovo, Moldova, North Macedonia, and Ukraine).

Rahel Kahlert then provided a brief input on widely used standards in evaluation such as the UNEG Norms and Standards (updated in 2016) to be upheld in the conduct of any evaluation. Professional evaluation associations such as the German Evaluation Society or the Swiss Evaluation Society developed their own standards for evaluators to apply in their daily professional work. Common features include accuracy (methodological and technical standards), propriety (legal and ethical standards), utility (serving information needs of intended users), and feasibility (realistic, cost-effective evaluation). As evaluators, we have to remind ourselves that we are dealing with persons and intervene in a setting. Therefore, it is important to follow ethical guidelines and protect human participants similar to any research setting.

The small-group breakout sessions dealt with the question: “How can standards enhance the quality of an evaluation?” The teams of 4 to 5 persons selected two to three evaluation standards and then applied them to a “real-world” setting. The teams used the online pad tool Google JamBoard (see Figure 1) to make their case by adding post-its. For all three teams, utility stood out as important evaluation standard. Involving stakeholders was regarded as a means of enhancing utility, i.e. improving the uptake of findings. This may sometimes conflict with the standard of independence, when donors or programme staff would like to influence evaluation findings (“interested only in the good stories (positive findings)”). Accuracy can be enhanced through triangulation and cross-referencing data, which ultimately also can improve utility and uptake.

The programme, Expanding Cooperation with Civil Society in the Eastern Partnership Countries and Russia, enables civil-society organisations and the members of the public active in them to implement joint projects, thereby supporting the ongoing transformation processes in the region.

The programme, Expanding Cooperation with Civil Society in the Eastern Partnership Countries and Russia, enables civil-society organisations and the members of the public active in them to implement joint projects, thereby supporting the ongoing transformation processes in the region.

Through the programme, the German Government funds measures that provide comprehensive support to the transformation and internal integration processes via collaboration between German civil society and civil societies in the Eastern Partnership countries (Armenia, Azerbaijan, Belarus, Georgia, the Republic of Moldova, Ukraine) and Russia.

This includes the entire range of cultural and civic education projects – media, academia, education including vocational training, culture, language and work with young people. Project outlines (in English or German) for the year 2022 can be submitted from 10 September 2021 until 15 October 2021 via this website . Read more

The Council of Europe is launching a call for proposals with the aim to co-fund national and local projects in Armenia, Azerbaijan, Republic of Moldova and Ukraine focusing at supporting victims of discrimination, hate speech and hate crimes, particularly from vulnerable groups.

03/10/21 CfP: Grants for support to civil society organisations for increasing access to justice for victims of discrimination in Armenia, Azerbaijan, Republic of Moldova and Ukraine

The deadline for the submission of application is 3 October 2021 (at 17:00 CET). Applications should be sent to the following e-mail address: tenders.antidiscrimination@coe.int. Read more

This Call for Proposals seeks to allocate grant funding to projects which monitor the implementation of EaP targets, deliverables and related reforms (Lot 1), and addressing the EaP CSF’s strategic and advocacy priorities (Lot 2).

Following the success of its Re-granting to Working Groups scheme over the past six years, the Eastern Partnership Civil Society Forum (EaP CSF) Secretariat is launching a Call for Proposals under its new, re-worked Re-granting to Members programme. This scheme aims to support the work of EaP CSF members to develop and deliver on the strategic policy, advocacy and capacity building priorities of the Forum within the regional dimension. Read more

Online article: Can the EU’s new global strategy make a difference? Strengthening resilience in the Eastern Partnership countries by Kakachia et at.

Book: The Struggle for good Governance in Eastern Europe by Emerson et al.

At a time when many regions of the world, Europe included, see a resurgence of authoritarianism, several countries in Eastern Europe: Ukraine, Moldova, Georgia and Armenia, are struggling to counter this trend by developing European-style democracies.

In this second edition, three years after the first, the story of Eastern Europe’s dramatic struggles to achieve properly functioning democracies and the rule of law rages on, warranting deeper analysis and substantial updating. Read more