By Muhamet Klinaku, Department of Labour Market, Employment Agency of the Republic of Kosovo

The COVID-19 pandemic which appeared at the end of 2019, first in China and then spread throughout the globe reached Kosovo in March 2020. As a result, and due to its rapid spread the government of the Republic of Kosovo, in accordance with the recommendations of the National Institute of Public Health in Kosovo, and similar to most other countries in the world, starting from March 13, 2020 imposed measures which restricted many economic activities and then restricted the movement of people. Among other measures, all hotel and gastronomy businesses, interurban transport and other businesses that sell specialized goods (textiles, etc.) were closed. As a result, most Small and Medium Enterprises (SMEs) are already affected by the coronavirus in most countries of the world, and Kosovo is not an exception to having economic implications for the country.

Kosovo belongs to the group of upper-middle income countries group. Similar to the average growth trend in the respective group of countries, Kosovo has experienced constant growth rates over the past years. Figure 1 reveals that between 2010 and 2019 average real GDP growth was around 6%, varying between 3% and 9% over the years.

GDP growth rates have to some degree translated into increased employment opportunities and decreased unemployment throughout the years, as one of main economic issues that is challenging the Kosovo economy. According to the Kosovo Agency of Statistics, shown in Figure 2, labour force participation in the working age population has increased from 37.6% in 2015 to 40.5% in 2019, reflecting a decreasing rate of inactive people in the working age population.

In terms of women participation in employment, data reveal a persistently large degree of disadvantaging women in the labour market (see Figure 3).The same trend has followed in terms of employment rate (employed people in the total of the working age population) which has grown from 25.2% to 30.1% between 2015 and 2019. More importantly, the rate of unemployed people has decreased in the respective period, falling from 32.9% in 2015 to 25.7% in 2019. Despite small variations across the annual rates, data suggest a solid positive economic trend before the COVID-19 outbreak.

Youth unemployment also showed a decreasing trend (see Figure 4), reducing from 57.7% in 2015 to 49.4% in 2019. On the other hand, share of vulnerable groups in total employment has decreased from 22.8% to 18.8% between 2015 and 2019, which suggests for an average growing trend of more quality and decent work opportunities in the economy. 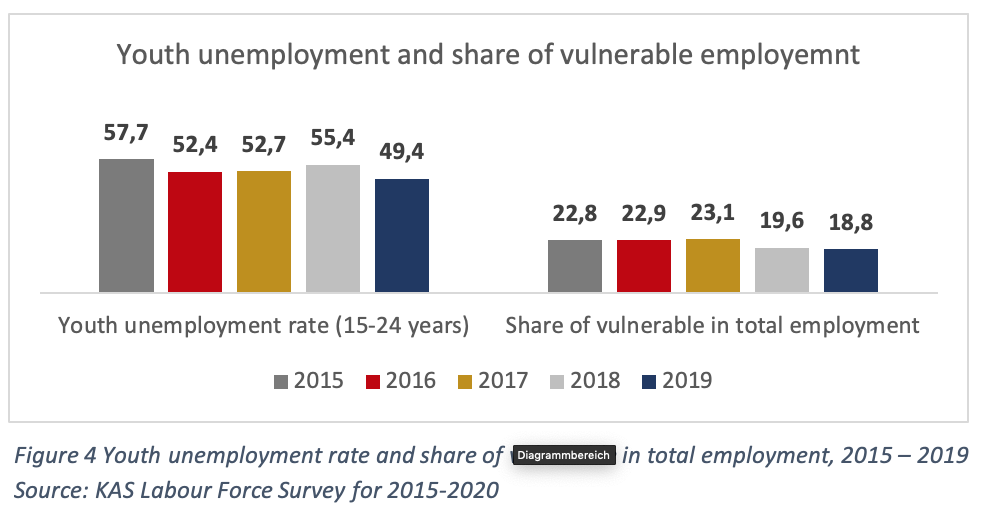 However, COVID-19 pandemic is continuing to affect the economy beyond initial expectations, so the situation remains uncertain. The Kosovo Government has estimated a GDP contraction of around 3% in 2020, while World Bank latest estimations suggests that it may be as high as 8.8%. The large decrease is due to worsening of the economic indicators, which have deteriorated as compared to initial estimations. However, World Bank outlook projections beyond 2020 are positive, suggesting for a GDP growth of over 3% in 2021 and over 4% in 2022. About 80 percent of Kosovo travel service exports are driven by Kosovar diaspora, whose arrivals in bigger numbers are expected to happen as soon as travel measures will be lifted, anticipated to influence spending and investment (World Bank Report, 2020).Despite a positive outlook that prevailed until 2019, COVID-19 pandemic outbreak in 2020, followed with restrictive policies by the government, has temporary reversed the growth trend. It has negatively affected economic activities, with stronger impact on the private sector, both in terms of income and jobs. Working hours have been reduced and many businesses offered their employees leaves of absence without pay (World Bank Business Pulse Survey, 2020). Some preliminary studies suggest that the number of unemployed has increased dramatically during the second quarter of 2020, The Kosovo Employment Agency has recorded around 80,000 additional job seekers[1].

[1] Source: Employment Agency of Republic of Kosovo , Report for 2020.